TQLZ series high efficiency vibrating screen utilizes double vibration motor to drive the alternating motion of screen, so that the screen can clear big and small impurities from grains. Also, the equipped vertical suction pipe or circulation air separator at the outlet can effectively get rid of dust and light impurities in grains. This vibrating screen is mainly used in wheat flour making, maize flour milling, rice milling, and also other fields.

The cylinder screen is installed in grain receiving section of flour mill plant. Its inner cylindrical screen serves to separate coarse impurities from cereals during the pre-cleaning phase, such as straw particle, string, paper, pieces of wood, maize stalk and cobs, etc. While the outer cylindrical screen can get rid of the small impurities in grains; the dedusting part can remove dust and light impurities.

TQSF grading gravity destoner
The TQSF series grading gravity destoner utilizes the specific gravity and suspending velocity differences of grain particles and stones (or sand) to separate stones from flowing grains, and divide the grains into light and heavy parts. It is composed by 2 sieves. The upper sieve is used to realize the latter function, while the lower sieve realizes the former function.

FDMW series intensive wheat scourer is an ideal wheat cleaning equipment. It can decrease bacterial content, get rid of pests and empty kernels. Its main function is to decrease grain ash content, clear away the dust on any part of wheat. In pre-cleaning process, bacteria, pest and empty kernel contents decrease under strong strike and friction, at the same time, dust and small pest pieces in grains also decrease. In second-cleaning process, by dampening, the peeled husk can be moved away. This wheat scourer is equipped with a vertical air suction pipe or self-circulation aspirator, which can clear away the dust on wheat surface in time. 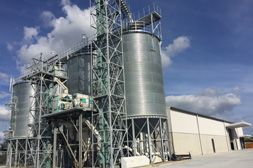